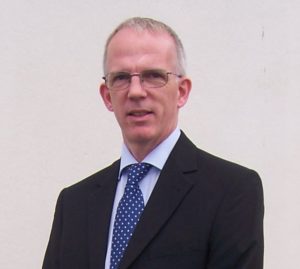 Nick Austin is a graduate of the Guildhall School of Music and Drama, where he studied under Carola Grindea and Harold Dexter.

Nick took up the Amchor baton in September 2018. His first concert, last November, was Mozart’s Requiem with the New Mozart Orchestra. This was followed, in May 2019, with performances of Poulenc’s Gloria and Duruflé’s Requiem.

An avid show tune lover, Nick was Musical Director for the Crowthorne Musical Players from 1988 to 2016. Productions included Hello, Dolly!, Guys and Dolls, Carousel, Pirates of Penzance (Broadway Version), Oklahoma, Singin’ in the Rain and Fiddler on the Roof. In 2015 he was Musical Director for Reading Operatic Society in their production of The Best Little Whorehouse in Texas. The show received 3 nominations from the National Operatic & Dramatic Association including ‘Best Chorus’.

Nick has been rehearsal pianist for the Bracknell Choral Society since 1981. He regularly accompanies and plays continuo in their concerts. He is also an occasional accompanist for Walton & Weybridge Amateur Operatic Society.